How the Red Sox can Become a "Dangerous" Playoff Team ... Again. 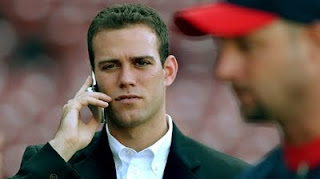 Obviously the 2009 Red Sox season was a disappointment. Boston was clearly a weak team when it counted, with a lineup that couldn't secure enough timely hits, and pitching that couldn't match up against the competition. Worst of all, it appears the New York Yankees made enough good moves surpass Boston for this year and beyond, at least on paper. Yankees fans certainly take comfort with the production they've gotten with stalwarts Derek Jeter and Jorge Posada. Despite the fact that both players are relatively old (35 and 37 respectively), they know how to win and lead by example. Of course having Alex Rodriguez and Mark Teixeira in their prime, crushing the ball in the middle of that lineup never hurts.

These were two players that the Red Sox coveted and for good reason. Every baseball fan understands that if the Yankees want a player, and that player wants to be paid, that player will end in pinstripes. New York will most likely have some opening in their outfield and plenty of money to spend. By parting ways with the likes of Johnny Damon, Hideki Matsui and Xavier Nady, the Yankees will save a total of $32.5 million dollars. If they want Jason Bay or Matt Holliday, they will have no problem putting an attractive financial package together. Following a disappointing, playoff-less 2008 season, the Yankees realized their starting pitching was a considering hindrance. So they signed the best free agent pitcher on the market (C.C. Sabathia, $161 million) and a nice complimentary piece for ridiculous money (A.J. Burnett, $82.5 million). The major acquisitions of Teixeira, Sabathia and Burnett all panned out for New York and as a result, they dominated their A.L. rivals.

Boston fans understand their team doesn't have the ability to spend $423.5 million dollars in an off-season to become a legitimate contender. Luckily for the Red Sox, this team isn't very far away, but as GM Theo Epstein never seems to sit pat, and realizes that 2010 might be the last season to win a championship with this group of players. David Ortiz, Josh Beckett, Mike Lowell, Jonathan Papelbon and possibly Jason Varitek all have contracts that expire after next year. Here are the top five areas the Red Sox can address to make a legitimate title run with their current group of players, while constructing a team that contends every year (in order of likelihood):

1. Acquire an impact outfield bat - This scenario must happen simply because Bay is a free agent. There is decent chance that Bay resigns with the Red Sox, but other teams will compete for his services. Holliday would be the next best option if Bay goes elsewhere, but these two players are at the top of all free agent outfielder lists for a reason. All teams that miss out on Bay, will target Holliday and vice versa. There has also been some recent discussion about a trade for Rockies slugger Brad Hawpe, or moving Jacoby Ellsbury to left field and acquiring an impact player in center field. Players like this are hard to come by. Carlos Beltran has been rumored to be on the trading block for the last two off-seasons and maybe Toronto would be willing to dump Vernon Wells' salary. There could also be a stop-gap player (i.e. Bobby Abreu, Johnny Damon, Jermaine Dye) if the Sox strikeout on a top-tier free agent. The most likely scenario is that the Red Sox retain Bay and keep the same outfield from 2009.

2. Acquire an impact first base bat - It seemed there was one thought on the mind of most Red Sox fans after Jed Hoyer was hired as general manager of the San Diego Padres: get Adrian Gonzalez. The Red Sox came up empty on Teixeira and it hurt them. Gonzalez is the same type of player. He can flat out hit and plays his position with the best of them. The Red Sox inquired about his availability at the trading deadline and realize it's going to take a lot to trade for him. But Hoyer knows the Sox farm system better than any other competing GM at this point, and the Padres know they must rebuild. Gonzalez is far too valuable to languish on a bottom-feeding team. Hoyer realizes that the Sox are very interested and also have what it takes to make a deal. Another player who could help the Sox is a familiar face from last season, Adam LaRoche. In his brief stint with Boston, LaRoche proved why Epstein liked him as a player. He is a good fielder and hitter who is very comfortable using the green monster. Had the Red Sox not acquired Victor Martinez, LaRoche would have finished the season in Boston and was hitting very well at the time of his trade to the Braves. He was obviously surprised to be traded after six games, but said he enjoyed playing in Boston and was happy the Red Sox traded him to a team he played on before. If either of these two players were acquired, Kevin Youkilis would become the team's primary first baseman and Mike Lowell would be moved or in a DH platoon with David Ortiz.

3. Acquire an impact shortstop - Alex Gonzalez was a great late-season addition to the team in 2009, providing solid defense and decent hitting from his position. Epstein has had well-documented and expensive problems with shortstop following the 2004 season. (see Edgar Renteria and Julio Lugo). One move that would certainly make Sox fans excited would be to bring back the guy they never should have discarded, Orlando Cabrera. He definitely doesn't field as well as Gonzalez, but he can consistently turn the lineup over and brings the type of energy that the Red Sox sorely missed this year. Cabrera seemed to bring that spark to the Minnesota Twins and one would think he could do the same for Boston. Might he sign a two-year deal for decent money to play for a contender? Marco Scutaro is another player who could provide a much-needed offensive spark.

4. Acquire an impact baseman - It's hard not to like Mike Lowell. He was a big reason why the Red Sox won the championship in 2007. But it's not easy to ignore the fact that he's 35 years old and has an arthritic hip condition. He is in the last year of his contract and one would expect he would be difficult to trade. But John Henry seems to have little problem absorbing contracts that make a player more moveable. We also know that Lowell would have a difficult time accepting a role as a part-time player. But the Red Sox can't feel comfortable going into 2010 with a question mark at this important position. Chone Figgins is the most electric free agent at this position. He would give the Red Sox a potent leadoff hitter, as Jacoby becomes more comfortable with that role. Figgins would also give the club additional flexibility as a player who can play the outfield. Adrian Beltre had a very tough year with injuries, but he hits for power and won gold gloves at third base in 2007 & 2008. He turns 31 at the beginning of next season and seems like the type of player Epstein would pursue as he attempts to improve the team's offensive output while keeping the defense intact.

5. Acquire a top-notch starting pitcher - The Red Sox have Jon Lester locked up through 2013. Beckett is pitching for his next contract. Daisuke Matsuzaka is signed through 2012 and the Red Sox won't have to worry about another World Baseball Classic burnout unless he plays for them in 2013. Clay Buchholtz showed promised this year and is controlled for the next four years. Epstein understands what a dominant pitching staff can do, especially in the playoffs. He had a productive Pedro Martinez and Derek Lowe entering the 2004 season, and added Curt Schilling to shift the balance of power in the playoffs. Epstein must have known that retaining Pedro after 2004 would be difficult, and the Schilling trade not only helped for their world series run. but also gave the team insurance when Martinez and Lowe left for bigger contracts.

The 2009 free agent starting pitching class boasts a handful of impact starters that would undoubtedly make the Red Sox a better team for 2010 and beyond. John Lackey is the front-runner and has earned himself a handsome payday after this year's post-season performance. The Angels will most likely let him walk, but there will be still competition for a pitcher of his caliber. Cliff Lee is another talented player who will be in demand, but many people see Lee as a great fit with the Phillies in the National League and they gave up a decent haul of prospects to get him. One would guess he's staying put. There has been discussions that Arizona would not pick up Brandon Webb's option, but that appears less likely. If Webb is made available, the Red Sox will undoubtedly talk to former Epstein assistant Josh Byrnes about a deal. Erik Bedard seems to fit the mold of a reclamation player that could yield a high return on a short-term, incentive-laden deal. Rich Harden is also a talented pitcher who's injury history may scare a few teams away, but the Red Sox certainly aren't afraid to sign players off this nature, put get them into a program where they can hopefully succeed. One player who people might have forgotten about is Roy Halladay. It might take an enormous amount to get him and he's also a free agent after 2010. Securing a pitcher of this level would be a huge boost to the Sox chances in 2009. The same can be said for "King" Felix Hernandez and he would make more sense because he's only 23 and under his team's control for the next two seasons. The Red Sox would be doing back flips to get this guy as he is the type of player that allows you to lose a pitcher like Beckett without as much of a drop-off.
Posted by Unknown at 8:53 PM