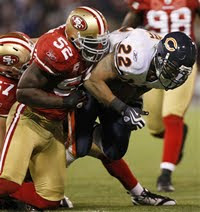 The 49ers had nine penalties and Jittery Jay Cutler had five interceptions giving him seventeen on the season. I bet Josh Mc Daniels slept like a baby with visions of Kyle Orten in his head. Oh yeah the final score was 10-6. Bring on the Pats and Colts let's see some real NFL football.