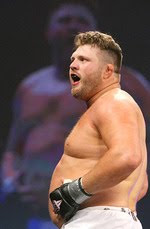 
The Ultimate Fighter Reality Show has been a phenomenon in TV entertainment, also serving as ground-breaking exposure for the UFC. The show, now in its tenth season, did not disappoint with last night's season finale. UFC matchmaker Joe Silva put together an exciting mix of the show’s upstart competitors and established company fighters.

In the main event Roy “Big Country” Nelson defeated ex-NFL pro Brendan Schaub. Nelson, a pot-bellied and seemingly out of shape fighter, tried to control the fight on the mat, his game plan throughout the show. Schaub resisted many positioning attempts from Nelson and showed good stand up ability. After the fight stalled on the ground late in the first round, referee Herb Dean stood the two fighters up.

Shaub came at Nelson with a powered left jab but missed his target, leaving his head exposed. Nelson took advantage and threw a right hook to Schaub's temple, knocking him out and to the ground. A stunned crowd cheered as a chagrined UFC President Dana White, never really a fan of Nelson, gave the prize fight contract to “Big Country” who told commentator Joe Rogen, “ I feel like getting some Burger King.”

A much anticipated war between Famous street fighter Kimbo Slice and knockout powerhouse Houston Alexander was less than spectacular. Houston did not seem like the fighter we all know and danced around for most of two rounds, seemingly afraid to engage Slice.

Slice finally listening to his corner, cut the ring off for Alexander, and the fighters were forced to engage. When they did finally connect, the power of these two fighters was evident, almost like two trains colliding. Slice showed promise and an improvement in his overall ability as an MMA fighter. He pleased the crowd with a suplex slam of Alexander which almost ended the fight. Slice won by unanimous-decision.

A fight between deaf and dangerous fighter Matt Hamill and Jon Jones was stopped at 4:15 of round one when Jones was called for an illegal elbow move called “12-6 elbows” that severely injured Hamill's nose. The 22 year-old Jones surprisingly controlled the fight against the All-American collegiate champion wrestler Hamill. Jones is big (205 lbs) and has amazing reach at 85 inches. Both fighters still have bright futures, especially Jones.

Other notable fights included Bostonian John Howard pulling out an amazing third round knock-out of Dennis Hallman with only seconds remaining in the fight after being down in the first two rounds. James McSweeney also had an impressive TKO of Darrill Schoonover in the third round. McSweeney controlled most of the fight, but had trouble with Schoonover until the third when he connected with vicious knees and punches.
Posted by Unknown at 1:15 PM

Email ThisBlogThis!Share to TwitterShare to FacebookShare to Pinterest
Labels: The Sports Hatch