Who's on 3rd? It's Business Time 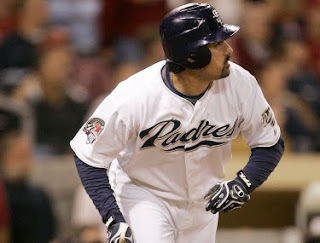 If anyone needs a reminder that the game of baseball is also a business, look no further than the Mike Lowell trade. Lowell took less money to resign with Boston following a successful '07 season and he seemed to have a target on his back ever since.

Sure he was the World Series MVP in 2007, but what have you an your achy hip done for us lately? Now the Red Sox finally got rid of him and were willing to eat $9 million to do so. Right now, this seems like pretty bad business.

Was Lowell's defense deteriorating that badly that he couldn't play out the last year of his contract? Good third basemen hardly grow on trees. There's been much discussion about the Red Sox signing free agent Adrian Beltre to take over the position.

Everyone agrees Beltre's defense is solid, but here's a guy who hit .334 with 48 HRs in 2004, while being linked to infamous Dominican trainer Angel Presinal. He never even came close to duplicating those number before or after that season.

The team will pay $18 million for Julio Lugo and Lowell to play elsewhere next season. Can they afford to give a decent sized contract to Beltre on top of that? Kevin Youkilis might want to take some additional grounders at third ASAP.

One way the Red Sox can justify this Lowell trade is to make a hard push for Padres all-star first baseman Adrian Gonzalez. New Padres GM (and former Epstein assistant) Jed Hoyer doesn't have to make the move at this point. Gonzalez is 27 years old and is under contract for $4.75 million in 2010 and carries a bargain $5.5 club option for 2011. He put up tremendous offensive numbers with very little protection, and is also fields his position quite well.

It will take A LOT to get him from San Diego, but the Red Sox have the prospects to make it happen. The Padres are not close to contention and it makes sense to get a haul of young players as they look towards the future.

If I'm the Red Sox, I lay out the whole menu of players: Clay Buchholtz, Casey Kelly, Ryan Westmoreland, Josh Reddick, Lars Anderson, the newly-acquired Max Ramirez, Jed Lowrie (will anyone want this guy again?), Josh Bard and Junichi Tazawa. You can have any of these guys for a player like Gonzalez. Obviously Boston isn't putting Kelly or Buchholtz in the same deal, but you get the picture. The Red Sox have more than enough pieces to make this kind of trade.

Gonzalez would be viewed as the team's best option, but there are certainly others. The Red Sox have always had an interest in third baseman Garrett Atkins, who may be non-tendered by the Colorado Rockies. You would expect he would cost a good deal less than Adrian Beltre. Free agent first baseman Adam LaRoche had a brief cameo for Boston this year and he looked like a player who would be very comfortable hitting line drives off the green monster.

It would be hard to imagine the Red Sox not doing anything significant this offseason. They won 95 games and many thought Boston was destined to match up against the Yankees in the ALCS. The Sox just weren't good enough.

Boston now has an opportunity to acquire an impact player in the middle of their lineup. Unfortunately, it had to come at the expense of "nice guy" Mike Lowell. Nothing personal, Mike. It's just business.﻿
Posted by Unknown at 5:10 PM