Craig Kimbrel the best reliever of this decade?

A few months ago, with Craig Kimbrel in the midst of a 15-inning scoreless streak, fellow Boston Red Sox reliever Matt Barnes took stock of the closer's excellence.
"Craig has been this good for, what, six years?" Barnes asked.


Eight, actually. But Barnes' point was well taken. Since the first time Kimbrel scaled a major league mound, on May 7, 2010, in Philadelphia, he has been pure, unadulterated nasty. With a fastball that averages 97.8 mph, a curveball that bends like a banana and a pre-pitch stance in which he holds out his arms like a bat’s wings while he leans in to read the catcher's sign, he has turned out the lights in the ninth inning for three teams, including the Red Sox for the past two seasons.


So, yes, Kimbrel's early-season five-week run of not allowing a run and retiring 46 of 49 batters -- 28 by strikeout -- was impressive. But it was hardly out of character. 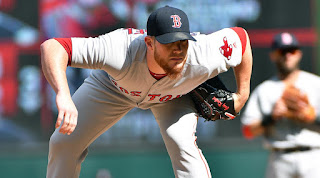 
"Nothing is ever given or automatic," Red Sox manager John Farrell said, "but he’s pretty darn close."


Indeed, at a time when the Red Sox are trying to close out the American League East, get Mookie Betts and Xander Bogaerts hot at the plate, keep Dustin Pedroia healthy, determine whether David Price is viable as a reliever and figure out why ace Chris Sale has ceased dominating like Randy Johnson over the past two months, their closer is one thing they need not be worried about.


"Guy throws anywhere from 97 to 100 mph from down here," Barnes said, dropping his arm to mimic Kimbrel's release point, "and then he has a breaking ball that comes right off of that same plane. When he's commanding it, the numbers kind of speak for themselves. I think he's been undoubtedly the best closer in baseball as long as he's been in the league."


Barnes is biased, of course. He also might be right. A strong argument can be made that Kimbrel is the best reliever of the decade.


About the only thing Kimbrel hasn't done is win a playoff series, but that isn't his fault. He converted his only save opportunity in eight postseason appearances, including two non-save situations for the Red Sox in last year's division series sweep by the Cleveland Indians.
"I've always liked Kimbrel at the top," one National League scout said when asked for his list of the decade's best relievers. "He gets you out three ways if he wants to. Filthy breaking ball, and he pounds the swing-and-miss from the letters in the zone to eye level. Excellent fielder. Does the little things so well."


Unlike most closers, Kimbrel was raised to be a reliever. He got his first taste of it during his freshman year at Wallace State Community College in Hanceville, Alabama. After dropping a panel of drywall and breaking his left foot while on a construction project with his father, he was eased back to the mound in a relief role before going back to starting again.


"His conditioning was riding a bicycle, and I decided, I said, 'Look, we're just going to put you in that closer's role,' because I had doubt, to be honest, about whether he could condition enough to be able to go six or seven innings," Wallace State coach Randy Putman said. "So it kind of fell into place for him, and he loved it. He loved it."


While Kimbrel's broken foot healed, he maintained his arm strength by throwing from his knees, part of a program developed by Putman. The result: Kimbrel built up his lower back and obliques and picked up steam on his fastball. Suddenly he was lighting up radar guns in the mid- and upper-90s, velocity not typical at the junior college level.


"I'll never forget, his sophomore year, we were playing in Tuscaloosa in a fall game, and I'd say there were probably 25 scouts in to see him. Every pitch was at 98, 99, and it was on the kneecaps," Putman recalled. "That was the tip of the iceberg. He had signed at Alabama, and I told the coaches there, 'You ain't getting him. He's going to go [pro].'"


Indeed, the Braves scooped up Kimbrel in the third round of the 2008 draft and had no doubt about his role. They saw him as the mirror image of Billy Wagner, the former All-Star closer with the undersized body and rocket arm.


Kimbrel didn't make a single start in 121 games in the Braves' minor league system. As a matter of fact, 80 of those appearances lasted only one inning, a pedigree that has shaped why Farrell has been so reluctant to extend Kimbrel beyond three-out saves the past two seasons.
"At the time, I think the preferred development path for even relievers was to give them multiple innings to allow them to develop their pitches," said former Braves general manager Frank Wren, now the Red Sox's senior vice president of player personnel. "But I think that's what was exceptional about Craig. It was pretty universal in our thought process that we will try to get him multiple innings at times, but this guy is a closer." 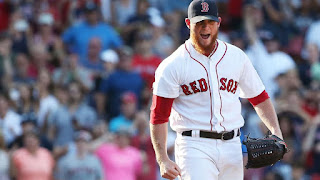 Kimbrel was traded to the San Diego Padres on the eve of the 2015 season and dealt again to the Red Sox before last season. By Kimbrel's standards, 2016 was a down year. He posted a career-high 3.40 ERA in large part because his walk rate skyrocketed to 5.1 per nine innings. Not one to make excuses -- or talk about himself, for that matter -- Kimbrel can safely attribute his struggles to midseason surgery to repair cartilage in his left knee.


"His health and usage are huge keys this year," the NL scout said. "I also think he's comfortable knowing AL teams now, whereas he was very cautious when he first arrived."
Read more here
Posted by Unknown at 9:55 PM